Edge computing helps overcome the main limitation of cloud services – latency, which is caused by the network. Minimizing network latency can be very critical for specific use cases in B2C, such as online gaming, and in B2B, especially around factory automation, connected workers (leveraging AR technology), and connected vehicles. AWS is going beyond the cloud and moving into edge computing. This is my key takeaway from the recent AWS re:Invent 2019 in Las Vegas, which I – and 65,000 other people – attended during the first week of Dec 2019. Of course, this is not a totally new development as AWS already offered IT infrastructure outside its data centers with Snowball Edge. Snowball Edge, an edge computing device, mainly for scenarios where connectivity to the cloud is missing or is very limited, and AWS Outposts was already announced in preview back in 2018. However, what is new is the fact that Outposts is now generally available, and AWS has started several initiatives simultaneously to quickly bring Outposts to market and leverage the investment to a maximum. 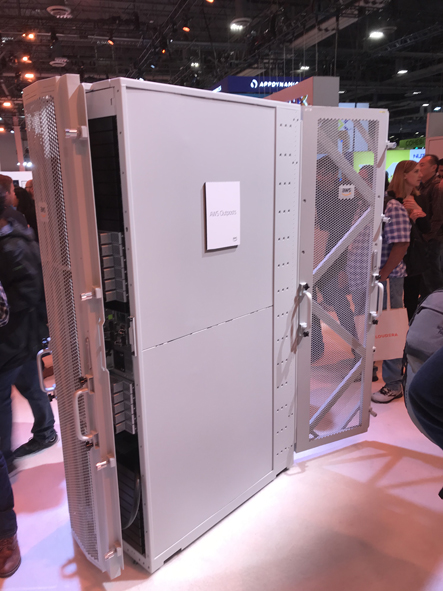 What is Outposts? Basically, it’s a rack that can be installed anywhere in the world where local compute power is required. The advantage is that Outposts is tightly integrated with the AWS Cloud, which allows customers to manage the system with the same management tools used for the cloud services available today. This creates an easy-to-manage hybrid cloud scenario for all AWS clients. Besides the “AWS variant”, a “VMware variant” will become available in early 2020.

How is AWS bringing Outposts to market? For now, we see three different ways. First, selling directly to clients. While they address clients from all industries, the list of first customers mentioned during the event indicates that manufacturing is one of their core target audiences for Outposts. Early clients include big manufacturing companies such as Continental (through its business unit Vitesco Technologies), Phillips, and Volkswagen (remarkable: VW and Industry 4.0 was even a prominent topic during the keynote by Dr Werner Vogel). Second, selling through telecom providers, via a new offering which AWS announced at re:Invent, called Wavelength. This offering places Outpost directly at the sites of telecom providers to establish so-called Wavelength Zones. The purpose of these Wavelength Zones is to provide an integrated solution by combining AWS Outposts (for compute and storage) directly within the 5G networks of telecom providers. This approach should enable developers to build mobile applications with ultra-low latency and pay only for the compute power and storage these apps use.

To bring this to market, AWS has launched partnerships with Verizon, Vodafone, KDDI, and SK Telecom. More partnerships are planned, and we expect to see a fast-growing partner landscape soon. Third, AWS will use variants of Outposts also internally, as standard equipment for its newly announced AWS Local Zones. Local Zones can be seen as local add-ons (around cities) to enhance the worldwide cloud network infrastructure of the AWS Regions. This again helps to overcome network limitations for dedicated use cases (such as gaming) around specific cities. AWS is currently building the first Local Zone around Los Angeles.

From a pricing perspective, clients cannot use Outposts within their own data centers in a pay-as-you-use model (besides upfront payment, only fixed monthly fees over 3 years are an option). However, if clients prefer a pay-as-you-use model for Outposts, they can use Local Zones. Since Wavelength is still in preview, pricing options are not published yet.

Outposts is a highly strategic topic for AWS and they are jump-starting their go to market now. However, there are also some challenges for AWS with regard to Outposts. First, delivering and installing HW is a new business for AWS. And while they do have internal skills and can also fall back on partners for this, they will certainly have to go through a learning curve to ensure delivery on a global basis. Second, it is so far not clear which AWS services have to run on Outposts to create the most value for clients. AWS will define this as they go forward and has launched the first available services on Outposts in close cooperation with its beta customers over the course of 2019. Outposts is not designed to work in environments without connectivity to the cloud; for example, it requires network connectivity at least every few hours to ensure proper system updates.