Cloud, IoT, and analytics are highly dynamic but widely established building blocks of digital innovation. In addition, less mature, or even newly emerging technologies are considered as important milestones of digital innovation, such as blockchain technology, augmented/virtual reality (AR/VR), and quantum computing.

More than half the respondents said they had blockchain use cases in place. At its core, a blockchain is a distributed database. The broad distribution of information is the most important feature of blockchain solutions, as it promises maximum transparency, immutability and protection against manipulation, and security. So-called smart contracts can ease collaboration between partners and can be used to create workflows and business process automation.

In private blockchains, the operation of nodes is regulated and usually restricted to active/approved partners in the ecosystem. The business partners are usually known, and the contents of the transactions are hidden and only visible to the respective trading partners.

Respondents most frequently mentioned payment services and traceability as use cases, but there were many others. Intellectual property, smart contracts, and non-fungible tokens (NFTs) were more or less equal. 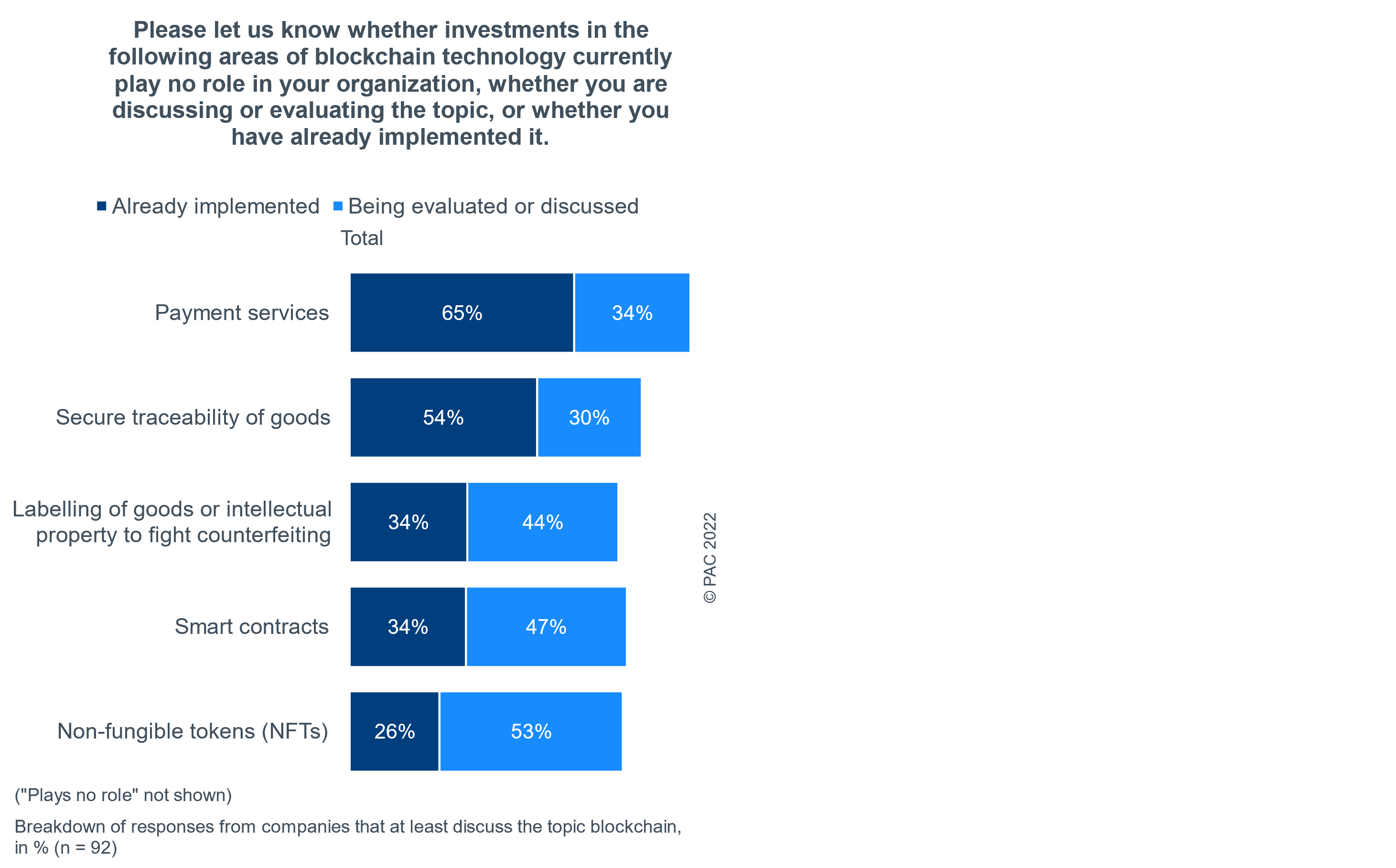 Being evaluated or discussed

Augmented (AR) and virtual reality (VR) have seen a significant rise in popularity in the past decade. In our survey, more than one third have use cases implemented, another 30% are discussing specific projects in the AR/VR space. While virtual reality (VR) refers to a digital image of reality created on a computer, augmented reality (AR) is the interaction of digital and analog life. Moving away from the physical and into the virtual world, smart glasses and other AR/VR devices, like smartphones or cameras, are on the rise.

VR goggles allow users to immerse themselves in a new, artificially created world that appears deceptively real. They can swim with whales in underwater worlds, explore a shipwreck, or walk through their new house before it has been built. This can be video content captured with a 360-degree camera or a 3D-animated world. However, virtual reality is always fully contained within a VR headset that shuts out the outside world. VR is mostly used for recreational purposes, but also for employee training, for instance.

Unlike VR glasses, AR glasses do not completely isolate users from their real-world environment. Instead, they display additional information about users’ surroundings. For example, warehouse workers are shown on which shelf they can find the spare part they are looking for; mechanics are given useful information about the technical components they have to repair.

A digital twin is a virtual representation of a physical product, space (e.g., building, factory), or process (e.g., production) that can be used for simulation before the real-life twins are touched.

The ultimate goal of the metaverse is to create a seamless world without interruption, similar to the real world. It includes elements of both AR and VR. While the B2C metaverse is very much focused on consumption, the enterprise metaverse addresses virtual collaboration, immersive learning, and virtual collaborative design, as well as AI training. Here, again, respondents also mentioned many other interesting use cases from various industries: 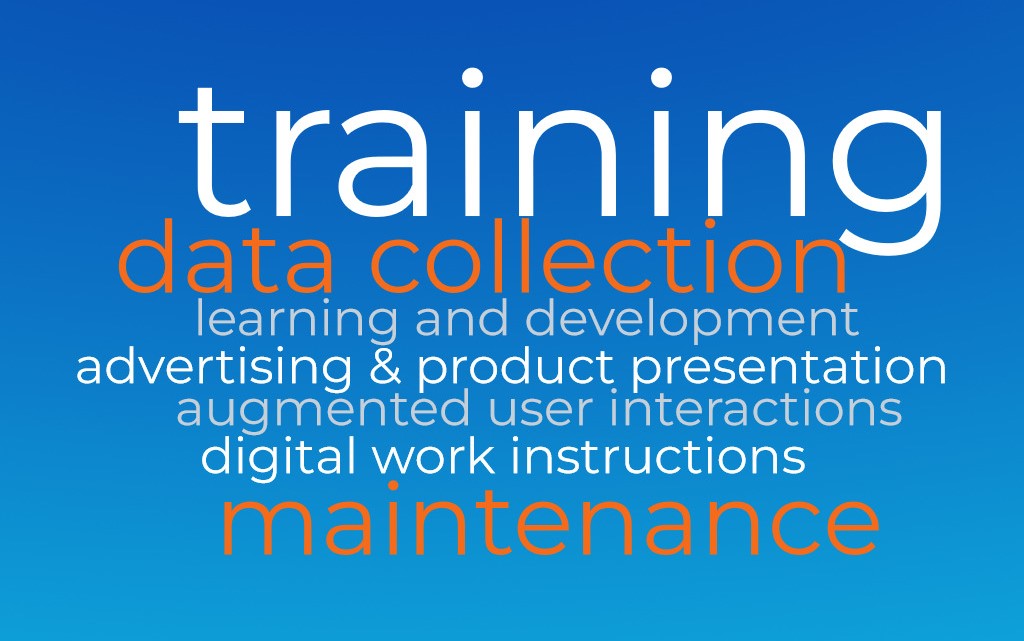 Many different use cases from various industries 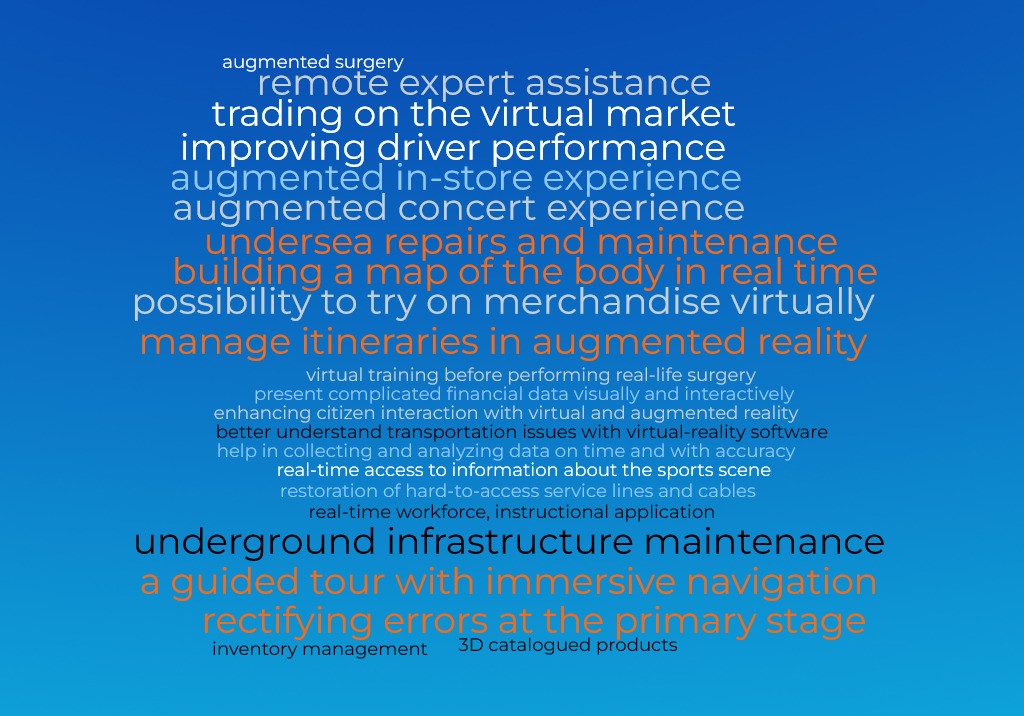 In our survey, less than 25% of respondents have already come into contact with quantum technology, but almost half are discussing related use cases.

A quantum computer uses the peculiarities of quantum mechanics to perform calculations and store data. The difference from a digital computer is that quantum computers operate in multiple states. That means they can effectively perform many computations simultaneously. One of the reasons for the excitement around quantum computing is the way they can scale for complex tasks like modeling.

This requires a specific type of algorithm that uses the simultaneous calculation ability. A typical digital computer task is programmed to perform a complex series of steps, whereas programming a quantum computer is more about implementing a specific algorithm.

Broad adoption of quantum computing is still a long way off, but the development of these computers is progressing, and quantum-inspired annealer technology is already available, which allows to do tasks in real time that are currently being done in batches, such as scheduling and fleet movements.

The shift to “real” quantum computing technology will be as epochal as the digital revolution – a greater variety of quantum-specific algorithms will be available, and speed will increase dramatically. It is therefore a good move to be ahead of the curve and start thinking about what building blocks will have to be put in place. When asked about the areas with the biggest added value, respondents mentioned many interesting use cases from various industries, mostly centered around some main areas of application:

Many different use cases from various industries 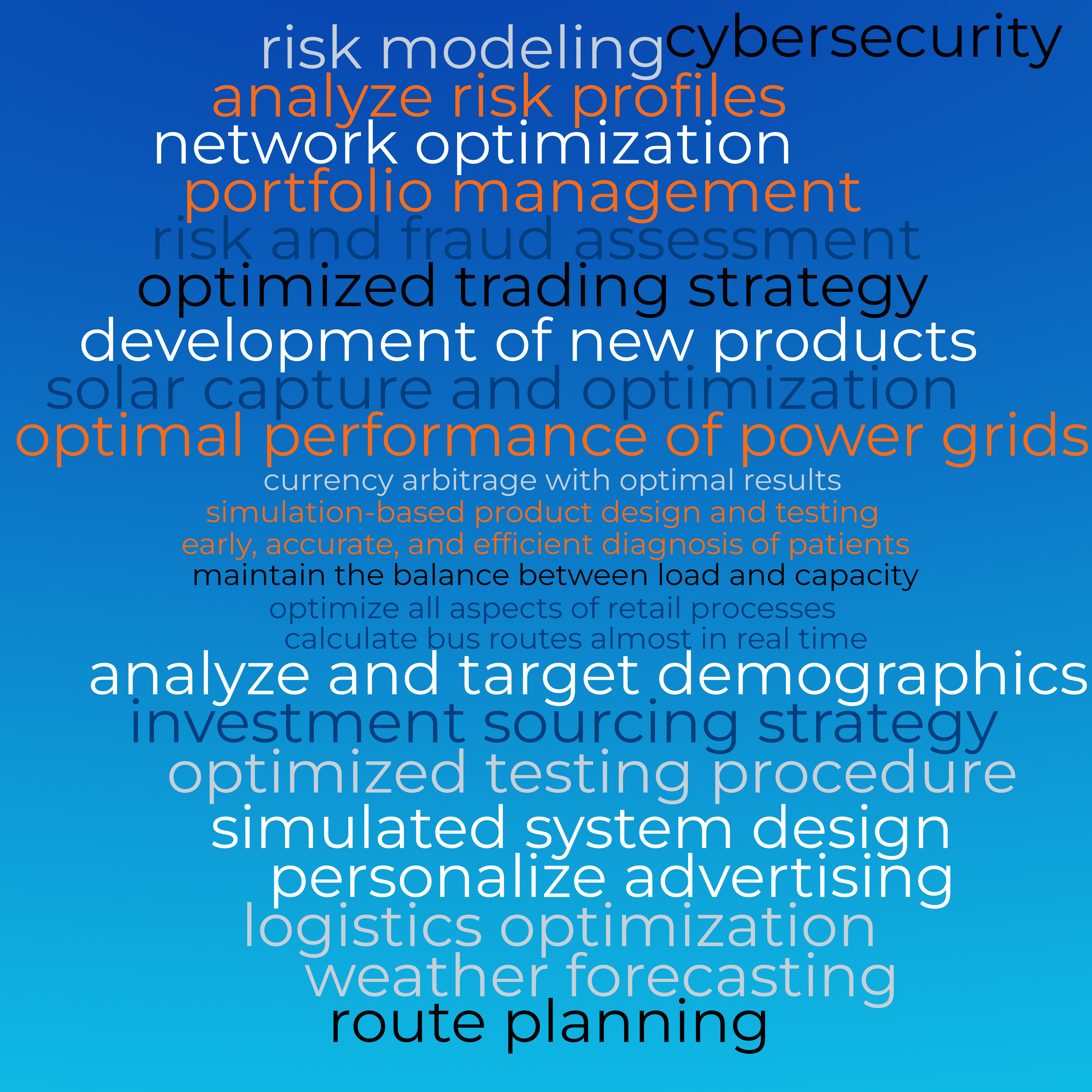 EU public-sector institutions have also realized both the potential and the risks of quantum technology. While most private-sector tech giants that drive R&D in the quantum computing space are headquartered outside Europe, European investments in the development of quantum computing are strongly driven by public authorities.