Today research and consulting firm teknowlogy | PAC published The IoT C&SI Survey 2020. It is the first edition of the customer satisfaction survey on the global landscape of IoT consulting and system integration (C&SI) providers. The comprehensive worldwide survey gives a voice to the growing number of IoT user companies. They shared their first-hand experience and provided over 2,000 responses on 32 vendors, including, among others, Accenture, Atos, Cognizant, NTT DATA, OBS, Reply, T-Systems, and Wipro, covering 24 key performance indicators (KPIs) and seven different categories. To ensure a fair and useful comparison, the providers are also segmented into eight different peer groups with a regional or project scenario focus.

The competitive situation for C&SI services across Europe differs from country to country, and IoT is no exception here. The French market is very special; even big vendors find it challenging to gain a strong IoT footprint. All the engineering consulting companies made it into the peer group for France. Most of them were able to convince their customers in a broad spectrum of KPIs (especially Industry Expertise, Implementation, and Customer Satisfaction). Their strong engineering and embedded software capabilities are especially helpful for clients around all IoT use cases where local intelligence plays an important role. teknowlogy | PAC sees two big local heroes in France, Atos and Capgemini, with a very high score in Competitiveness.

In the United Kingdom, the results of the survey show a strong performance by Fujitsu, HPE, and CGI. teknowlogy | PAC observes that Fujitsu has stronger consulting, vertical, and implementation skills in the UK than in other countries in Europe, where it is mainly a technology and infrastructure services provider.

In the German-speaking peer group (DACH region), two smaller providers (compared to the global players) turned out to be hidden IoT champions. Reply (Italian-headquartered C&SI provider) and MHP (a Porsche subsidiary) made it into the top positioned companies. In addition, they also achieved strong ratings in their respective key vertical peer groups: MHP in Connected Vehicles and Reply in Digital Factory. 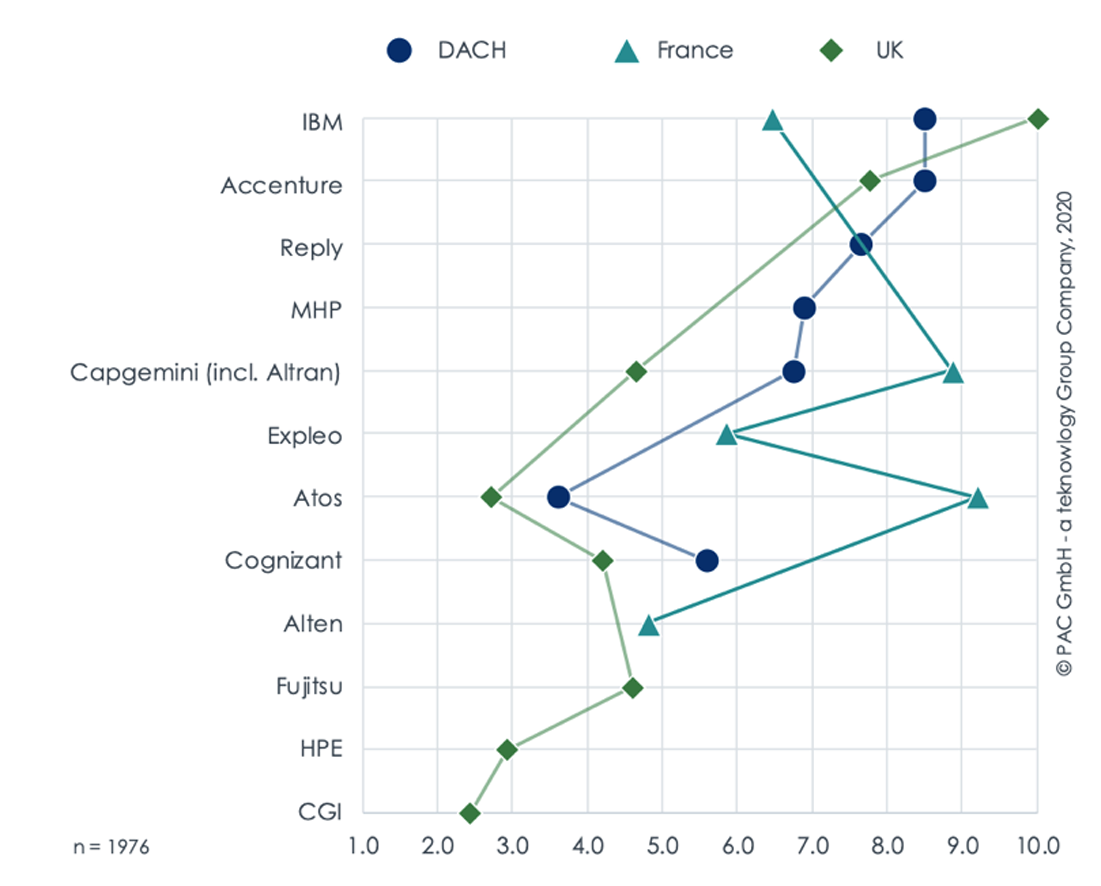 Partners of choice for IoT implementation

By reviewing different peer groups of C&SI providers, specific characteristics of these groups and of individual providers can be identified. For example, overall, customers are very happy with the work that “Indian pure players” (IPP) are doing in the IoT space. One finding is a bit surprising though – despite the fact that their market position is much stronger in the Americas than in Europe, customer satisfaction with the IPPs is higher in EMEA than in the Americas. Wipro is the only IPP with a top 3 position in both regions and overall customer satisfaction in consulting.

The big auditing firms, called the Big Four, are not able to convince their customers when it comes to IoT, except for a few KPIs. Only Deloitte made it into the first half of the peer groups. The results for the telcos and their subsidiaries indicate that their IoT capabilities are much more related to connectivity and operations management than to consulting and system integration. The only exceptions are Orange Business Services in the Americas and T-Systems in Germany.

“Our survey’s results provide an invaluable resource for companies that are currently looking for suitable IoT consulting or IoT system integration service providers that meet their actual needs and business requirements. We are pleased to be able to analyze this service provider landscape in such detail and thus provide up-to-date orientation in the fast-moving field of IoT and its ever-growing range of solutions and players. For example, in addition to the top-tier vendors, the survey also evaluates a large number of less well-known service providers – which in many cases were found to offer excellent value as well,” says Klaus Holzhauser, Global Head Digital Innovation & IoT at teknowlogy Group.

The IoT C&SI Survey 2020 was created based on a comprehensive survey among client companies of IoT-related services, conducted online in the second half of 2019. For the worldwide survey, heads of IoT, project managers, and developers in IoT user companies were asked to rate providers of IoT C&SI services. With a sample of almost 2,000 evaluations, the survey offers a high level of user feedback. 32 service providers that received the widest range of user feedback are compiled and evaluated in the survey. The providers are rated based on 24 KPIs in seven different categories. KPI dashboards help to provide precise information at a glance.

In addition, the providers are segmented into eight different peer groups so that competing companies can be easily identified, and a fair and useful comparison is possible. The peer groups are defined by teknowlogy analysts drawing on their experience and judgment, as well as customer responses. The segmentation is based on the two key factors of regional focus and project scenario. We provide a comprehensive overview of all the providers analyzed as well as an executive summary of the report, including vendor performances per peer group.

For more information and the executive summary, visit https://www.iot-csi-survey.com