Volkswagen Car.Software: The right move at the right time

By January 1, 2020, Volkswagen’s new Car.Software organization will be set to operate as an independent business unit within the Volkswagen Group and thus help to centralize software development. Initially, around 3,000 experts will be grouped together in this unit, and by 2025, Volkswagen plans to have more than 10,000 experts working in the new business unit.

However, Volkswagen’s ambitious plans don’t just stop there. In the long term, the new division will create its own software brand, including a dedicated brand design. Moreover, Volkswagen aims to boost the in-house share of car software development from currently less than 10% to at least 60% by 2025. The overall objective will be to establish a uniform group-wide software architecture and to merge parallel development paths across the different Volkswagen brands. 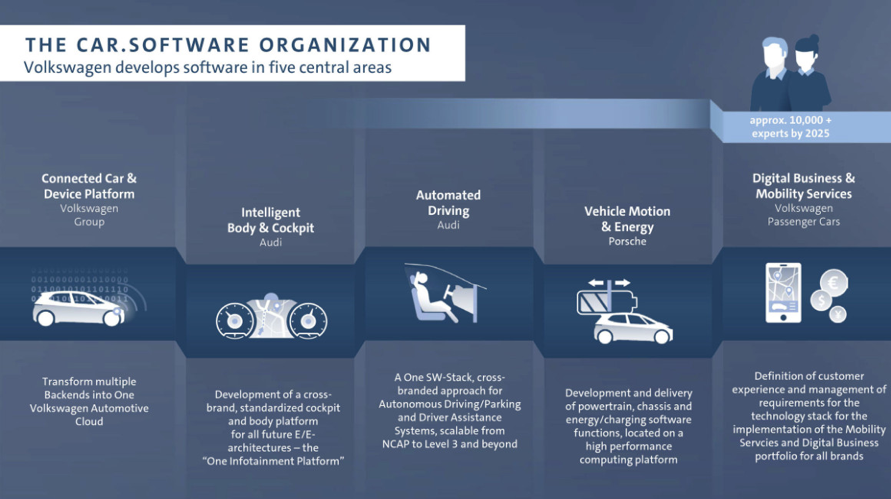 The new division will develop cross-brand software focused on five domains: Connected Car & Device Platform, Intelligent Body & Cockpit, Automated Driving, Vehicle Motion & Energy, and Digital Business & Mobility Services. Future development across these five domains will leverage Volkswagen’s own operating system, “vw.os”, as well as the Volkswagen Automotive Cloud. Volkswagen intends to run all the group’s new vehicle models on the new software platform. Some standard capabilities of the new software will be a parking finder or a search function for the next charging station for electric cars, to name just a few.

Given Volkswagen’s latest announcements, there can no longer be any doubt about the importance of software within a vehicle. Vehicles have long since become the new smartphone, and it is only a matter of time until digital companies like Google or Apple will provide the car version of their operating systems Android or IOS. To avoid becoming an appendage of these companies, Volkswagen is laying the groundwork in order to keep its sovereignty in the long term. Especially as the amount of data being created will only increase with the level of connectivity, it will certainly be reassuring if car software “Made in Germany” will be on board instead of software from data-hungry third parties.

Another aspect which needs to be mentioned is the fact that the new software could very easily be supplied to third parties, too. By cross-selling its MEB electric platform (which the company developed for the new Volkswagen ID) to Ford, the manufacturer has already demonstrated that it has an eye for finding new revenue sources.

The most significant and immediate impact, however, will be felt by Volkswagen’s current suppliers. It is very likely that, with Volkswagen taking greater part in the software development value chain, the number of suppliers could shrink. Especially for smaller IT software and services providers Volkswagen’s change in strategy could eventually become problematic. In the long term, however, Volkswagen, and any other OEM is dependent on the exhaustive IT capabilities that external IT suppliers will bring to the table and which Volkswagen will certainly have difficulties to develop in-house. Especially in areas where very specialized capabilities will be needed (e.g. autonomous driving), we expect the number of partnerships to increase even further.

We believe that by strengthening its software development competencies, Volkswagen is pursuing the correct strategy at a time where many new standards for the next generation of vehicles are only just being defined. In fact, this move will likely ensure Volkswagen’s technological independence as the development process for new vehicles is more and more transferring from hardware to software. The only question that remains is how well and how quickly Volkswagen will be able to make this transition from software buyer to builder?